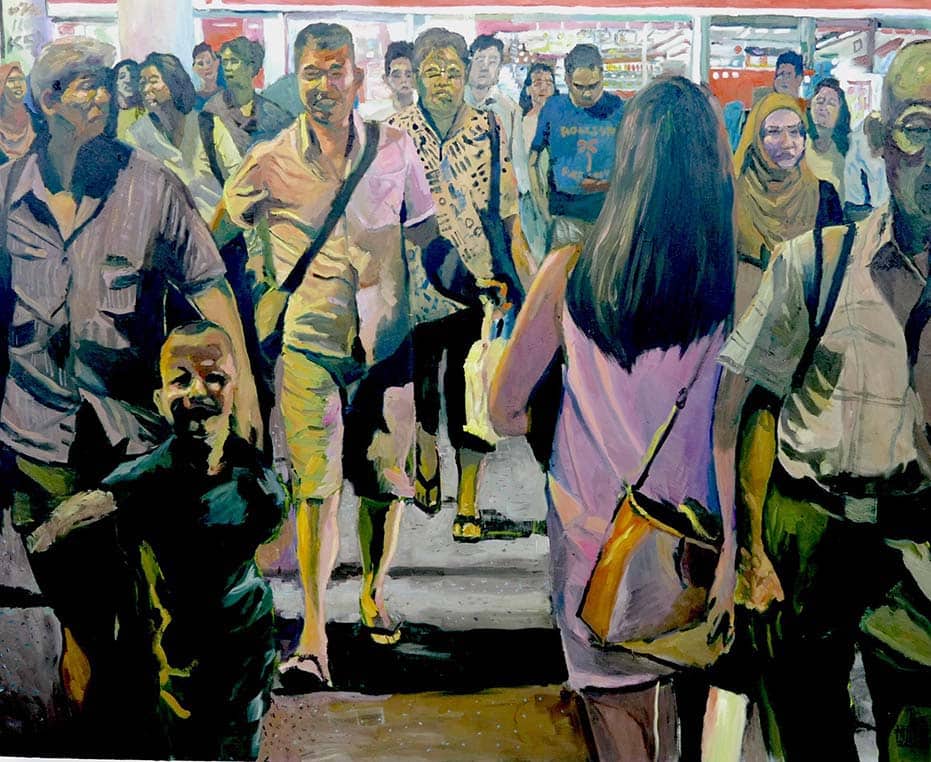 We caught up with prolific young artist Yeo Tze Yang, after his two successful shows at iPreciation in Singapore, and OUR ArtProjects in Kuala Lumpur (KL). Only 23, he’s already won a Silver award in the prestigious United Overseas Bank Painting of the Year contest and is presently pursuing a degree in Southeast Asian Studies at the National University of Singapore (NUS).

You paint in a realistic style – how do you feel about abstract or conceptual work?  Is there any reason why you choose not to adopt these styles?

Well, actually, some of my favourite artists are abstract painters, like Jackson Pollock. But first let’s talk about the context of abstraction in the contemporary art world – for me, it’s become a very contentious art form.

To me, it’s the kind of thing you see at art fairs and which eventually becomes decorative. I feel that it’s become very easy. 50 years ago maybe, it was a revolutionary art form, but in today’s context, it’s quite different. I once read an Eric Fischl interview, where he talked about seeing a de Kooning at an art fair and he was very excited, but in fact the de Kooning was part of a real estate company’s booth and the (pitch) was something like “if you buy this villa for several million dollars, you will get this de Kooning for a few more million.”

These are the kinds of things that make me feel sceptical.

Yes indeed. One could say that abstract art and conceptual art had specific contexts in which they were first developed, which is what made them so special?

As artists, we should be aware of the history upon which we paint. Whatever one puts on a canvas, one must understand, and be aware that there is a whole history of image-making behind every brushstroke placed on a canvas.

Tell us, where did you study art?

During my A Levels, in the Art Elective Programme in National Junior College. I covered art theory and art history in school, and then also studied these subjects on my own.

And now, while at NUS, are you taking any more art classes?

One or two, but of course no studio classes.

Tell us, why did you choose to pursue Southeast Asian Studies in NUS?

I took some introductory modules on different majors, and I found Southeast Asian Studies to be the most meaningful. I love it.

Although it’s multidisciplinary, what I love about it is that the course advocates for ethnography. You’re encouraged to be out in the field, to interview people and not just rely on academic sources. The professors encourage us to treat small, personal histories as important and valid accounts in themselves. I feel that art and (academic studies such as these) are not at all mutually exclusive.

How do you feel about the subjects whom you paint? For example, these chaps who look like they could be migrant workers on the bus – how do you feel about portraying the everyday lives of people, who might not be the same people stepping into art galleries to consume the finished products?

This is probably why I didn’t include people in my paintings previously!

I certainly didn’t want to speak for people who should be telling and writing their own stories. Who was I to speak for them?

But slowly, I started questioning why I was making a big deal out of it – I felt this especially when I was making the paintings for my KL show, which specifically featured people in transit. I felt like I was part of that crowd, getting home from school around 7 pm or 8 pm, grabbing dinner from the hawker centre, getting on the train….at that point, it started occurring to me that these people and I were in the same boat. How was I any different from them?

For example, these paintings of the tabao (takeaway) – these could be anyone’s dinner:

They were in fact, my own meals! And this painting of the fish and porridge:

It wasn’t my meal, but it could have been. It could have been anyone’s, and that’s the point. I don’t think I am actively trying to portray poverty or social injustice. These are just portrayals of ordinary people, who come from the life that I lead. They are just part of the things that I see around me.

I suppose if one sees social injustice in your work, it could be more a reflection of how the viewer sees the world, more than anything else. Moving on, the UOB painting of the year award – that comes up a lot in Google searches about you. That was pretty amazing!

I’ve taken part for many years, with my friends; and even with my dad! We would submit something every year and in 2 weeks’ time, just be prepared to go back and collect the painting. And then one year, we didn’t have to go back because we got a phone call (saying I’d won). I was quite happy!

I started making the submissions to the competition when I was 17. Back then, when I submitted works, I didn’t expect anything – I had just started painting. I heard about people however who would cry when they didn’t win anything.

Your dad is an artist as well. Did you grow up drawing all the time?

He’s a commercial artist, not so much of a fine artist. And yes, my parents were a big influence on me. Because of their interest, I was always going to museums and galleries for my weekend activities. My parents just liked looking at art stuff themselves, so they’d bring me.

Do you think winning the UOB award has changed your life in any way?

When I got the call, I was happy but I had to keep it a secret until it was officially announced. For me, in pragmatic terms, it helps my gallerists and it’s a nice thing to have on my CV. It’s affirmation and validation for my parents. I’m doing this very precarious thing of pursuing my art and making it a career. I can’t be not selling things and then expecting them to continue to encourage me. The award is proof to them that I’m trying, and they feel more confident and less worried about my future. When they came for the award ceremony, I felt like I was back in primary school, winning a prize!

Validation for me comes in other forms, from artists that I respect. In KL, an artist that I really admire came to my show – Gan Chin Lee—and I was quite happy when I saw him walking in. I was like “Wow! He wants to see my work!”

When Simon Soon recommended me to do the solo show in KL – that was also quite flattering, he’s a bright young academic who’s very prolific in the region.  Ahmad Zakii Anwar also came to my opening and later invited me to his house for Raya.

Your work really resonates with people. We found even on our platform – when we uploaded pictures on Facebook and Instagram – that the paintings garnered a lot of engagement and many comments.

One thing about my work, one thing that I’ve observed in recent years – I’d describe it as being very “Coldplay,” like the band! It’s very accessible and I’m not pretending to be anything I’m not whenever I make a work. The work is (therefore) easy to like which is something that I feel ambivalent about.

They aren’t pretty pictures though, are they?

Well, that’s the thing about paintings – they can be aesthetically pleasing even if the subject is objectively ugly, for example, like the leftover fish. I don’t (deliberately) try to be aesthetically pleasing, but the point is that ordinary things can also be very beautiful. You could use “beauty”, “poetry,” and all those corny words… but it’s really about working a bit harder to pay attention to simple things.

Back to Coldplay – is that what you want to be, really? One day, would you want to be something less vanilla, I don’t know… like maybe Florence and the Machine (to continue the musical metaphors)?

[laughs] Florence and the Machine is mainstream already lah!

This isn’t for me to decide – I just make the work that I feel is right, and that I believe in. How members of the public see it, that’s up to them.

To the point about mainstream acceptance – do you think your works can travel?  These paintings work well in Malaysia and Singapore, especially with your academic background – but do you ever think about whether they will sell well outside of the region?

There is a British painter I really like, George Shaw and another from China, Liu Xiaodong. I like them because I read up on them and I understand that their work reflects a specific context. Shaw for example, portrays his home and where he grew up, but his work still manages to resonate with me (in Singapore). Good art should be able to reach out to a common humanity.

Is it hard being an artist in Singapore? What are the best and worst things?

I come from a strange context where I’m not from a local art school, so I’m not part of any art community. I know some LASALLE art students who show together and hang out together. I have none of that. I’m a hermit, but I’m comfortable that way – most of my closest friends just don’t do art. I feel that this influences my art, as the people I paint for are not artists or the arts community, but just regular people.

I’ve had conversations with artists, and some people say, “Art is not for everyone!”

I get what they are saying, and understand it’s frustrating when the public doesn’t comprehend what you’re trying to do. At the same time, when you work on the basis of that assumption, it ends up influencing the kind of art that’s made. And that’s not the kind of art that I want to make. For me, I would want my grandma to look at my painting and be able to see something in it (which speaks to) her.

The best thing about being born in this era, as an artist? Well, Singapore is at the stage where it’s pumping so much money into arts infrastructure, that galleries are popping up everywhere and grants are readily available.

And the worst thing?

Well, I suppose the best thing here could also be the worst thing. For example, look at the Zhongshan building in KL – the whole thing is ground-up, unregulated. In Singapore, arts funding just feels more angsty and regimented, with complaints that the government is never doing enough. In KL, I felt like people just got on with the things that they wanted to do, with whatever resources they had. I’ve heard about artists in Singapore who don’t make any work because they don’t receive funding. It becomes such a barrier.

Tell us about your favourite artwork and artist right now?

Liu Xiaodong comes to mind. Not any particular work – but his canvases are gigantic, he brings them to villages in China and elsewhere, and just paints all day. He goes on field trips to different communities and produces documentaries of those visits, which I love to watch.

So what’s next for you?

Well, I’m thinking of starting a series of works based on research into Telok Blangah in Singapore, which is the residential estate where my grandmother lives and has spent 40 years of her life. I visit her every week and I feel like there is a lot to capture. Not grand histories, but little things which have just been sitting there (unnoticed) for decades. 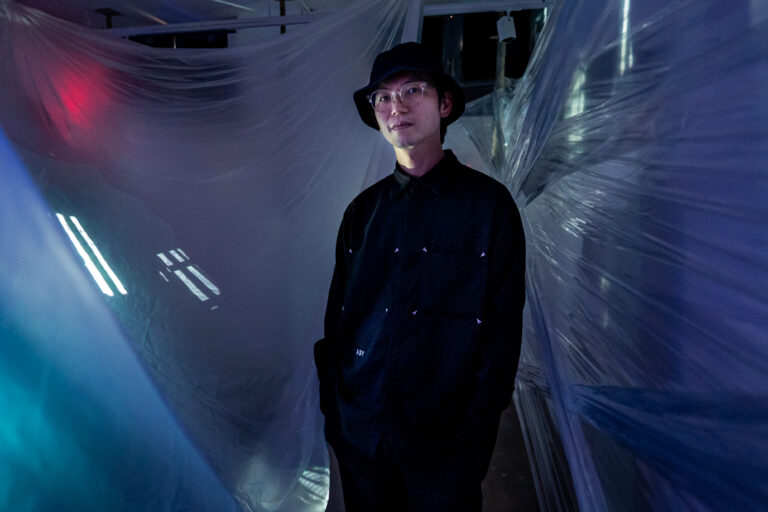 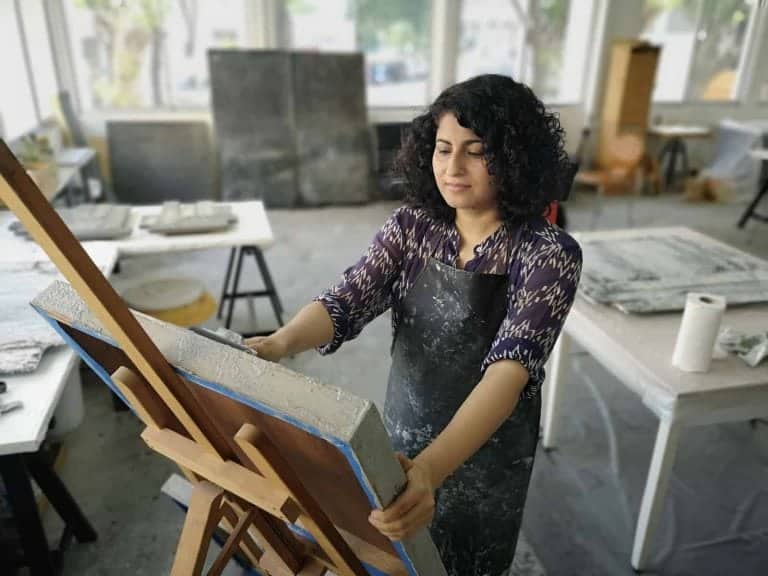 Normalising the Abnormal: A Conversation with Photographer Woong Soak Teng 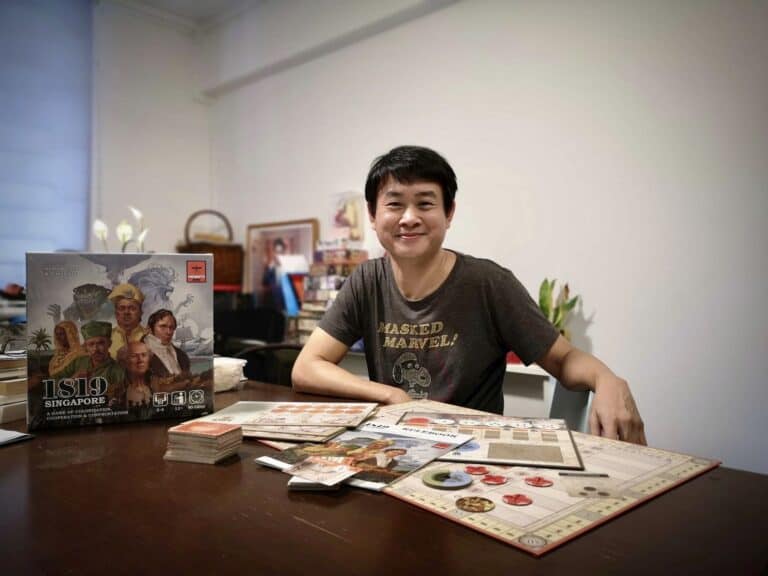