By now, many of us have heard (and perhaps been confounded) about Natasha— the 2022 iteration of the Singapore Biennale.

While we have been speculating about the choice of name (which is supposed to encourage us to critically consider the act of naming) or how its process-driven approach might express itself, selected artists have been hard at work behind the scenes.

One such practitioner is media artist Ong Kian Peng, whose immersive works sit at the intersection of art, technology, and the environment. Most recently, Ong wrapped up his residency at Darat al Funun – The Khalid Shoman Foundation in Amman, Jordan, which promotes art and artists from the Arab world. It’s one of two residency programmes organised by the Singapore Biennale, together with Darat al Funun.

Ala Younis, Co-Artistic Director of the Singapore Biennale 2022, explained that the partnership was forged to provide participating artists “a chance to culturally immerse themselves in a different environment as they develop their works in the home countries of the Co-Artistic Directors.”

It also falls in line with the Biennale’s “concept of progress” and vision that “the journey of artmaking is as important as the final creation of the artwork.”

The second half of the programme will see contemporary Jordanian artist Raed Ibrahim pursuing a residency in Singapore, which will “allow for more opportunities for understanding and collaboration between cultures.” These residencies’ locations take reference from the fact that Co-Artistic Directors Younis and  June Yap call Jordan and Singapore home, respectively.

Ong’s journey to Jordan began back in late 2021 when he was invited by June Yap to present his work and research to the Biennale’s Co-Artistic Directors. It was only in the earlier half of 2022 when Ong’s trip to Jordan was confirmed.

“Jordan came to me as a surprise,” he shared, “All I knew about Jordan before was (the archaeological site of) Petra.”

After conducting more research about Jordan, he discovered that the country had natural formations which could relate to the environmental themes in his practice, such as the Dead Sea.

Curious about Ong’s residency experiences, I caught up with him over a call to learn about what he’s been up to in Jordan, how the residency enriched his practice, and how his work ties into the Singapore Biennale as a whole. Read on to find out more.

A day in the life

As a writer rather than a practising artist, artist residencies have always intrigued me. While we know residencies give artists time and space to develop their works, what on earth actually happens during the course of them?

In response, Ong gave me a hearty laugh and outlined his daily schedules. Some days were filled with field trips and meetings with other artists, such as Ibrahim. But when he was on his own, he started his days as early as 6am — thanks to the early sunrise in Jordan. Mornings saw him read the news, make coffee, and check his emails before spending most of his day reviewing footage from various site visits.

“This [allowed me] to formulate how the work might pan out and consider the narratives that emerge from the materials,” Ong explained. He contrasted this with the act of recording footage out in the field, which would typically see him more “focused on intuition.”

Ong would call it a day when evening arrived, as he started to prepare dinner and wind down. Like any other Singaporean learning about another culture, I inevitably asked him about Jordanian food. He told me that he sticks to a Mediterranean diet on most days, but also tries to order different Jordanian or Palestinian dishes each week.

Connecting with the land

Being in Jordan and soaking in its landscapes allowed Ong to examine issues such as climate change and the impact of rising sea levels firsthand. As part of his process, Ong trekked along Amman’s numerous valleys and seasonal rivers, many of which connect to the Dead Sea. He reflected,

“I really enjoyed trekking as it allowed me to have a deeper connection to the land.”

Ong’s fondest trekking memory was from when he visited the river Wadi Mujid. It’s a river south of Jordan that empties into the Dead Sea. “You can trek along the wadi (river) and at one point, you’ll have to swim along [to cross it],” he shared.

“You can float along the river and look at the amazing landscape. Most parts of Jordan are sandy but this area was just rivers and waterfalls.”

Other formative experiences included joining a wheat harvest and visiting local copper mines as part of Darat al Funun’s Summer Academy programme. The wheat harvest event offered its participants the opportunity to be farmers for a day, before teaching them how to process the wheat and turn it into other ingredients. Not only did Ong come away from the event physically drained (with the muscle cramps to prove it), but it also left him with a “newfound admiration and respect for farmers.”

Visiting Jordan’s copper mines — which have existed for thousands of years — as part of an artist workshop proved to be equally eye-opening. An archaeologist took participants around the site and through the ruins, to encourage artists to create speculative narratives based on their observations and findings.

“I found it refreshing to experience a different perspective of the earth,” Ong reflected. “It also prompted me to think about the earth as an archive, which might affect my ongoing projects.”

As for how this ties back to the Biennale, Younis shared that it was moments like these proved to be “partly in the spirit of Natasha,” as they demonstrated “demonstrate in inexplicable ways the relationship to a place, to a land, to a culture.”

What we can expect

But seeing that Ong has been developing his work in Jordan all this time, what can audiences expect from him in the upcoming Singapore Biennale 2022?

Keeping climate change at the back of his mind, Ong is keen for his work to focus on “the impending death of the Dead Sea” and “what it means for a water body to die.” The work will also consider how the Dead Sea’s collapse affects a larger ecosystem of water networks.

Ong imagines that the work will be immersive and take the form of an audio-visual installation with an ambisonic (read: surround sound) soundtrack. He currently hopes to work on the soundtrack with the local Bedouin nomadic tribes, which have existed in the region for thousands of years.

On what he wants audiences to get out of the work, he ruminated, “I hope to help them forget about their presence in space and instead embark on this visual journey… The most important thing for me is to first, feel the place we’re looking at. [Viewers] need to imagine the landscape and consider the relationship between [themselves] and [what they are looking at]… and the wider context that is climate change.”

When asked about how his work ties to the idea of Natasha, Ong explained that both are “process-driven [experiences].” He also noted how the Biennale’s open and less didactic nature mirrors his own desire for audiences to derive meaning from what they see, rather than be concerned about “correct meanings.” In his eyes, both his work and the concept of Natasha hope to encourage viewers to “critically think about and reflect on the artworks” by themselves.

So, dear reader, where does this leave us with Natasha?

Speaking with Ong and Younis, I think I’ve gleaned a handful of defining — yet still nebulous — aspects of the Biennale. An emphasis on the art-making process and fostering cultural exchanges seems to be key, though I’m still at a loss as to how they specifically relate to the name ‘Natasha’ or how that specific name fits into the narratives of climate change and the Jordanian Dead Sea. That being said, one thing was clear — there’s a tremendously exciting work being developed for the Singapore Biennale far away from home, and I can’t wait till it returns to our tropical shores. 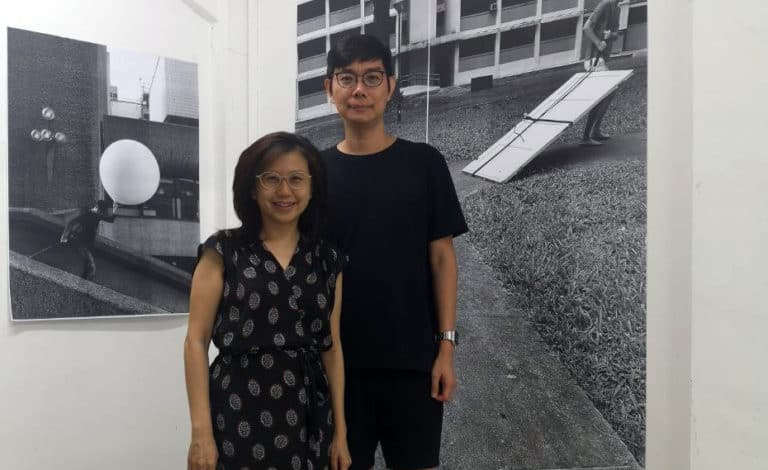 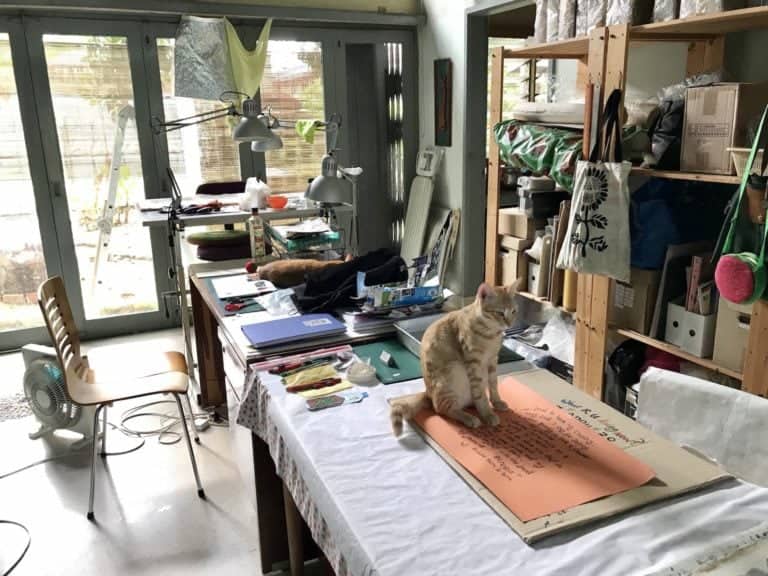 The Artist-Collector Relationship Behind “I am a CON artist”: Justin Lee and the Teng Collection at the Private Museum 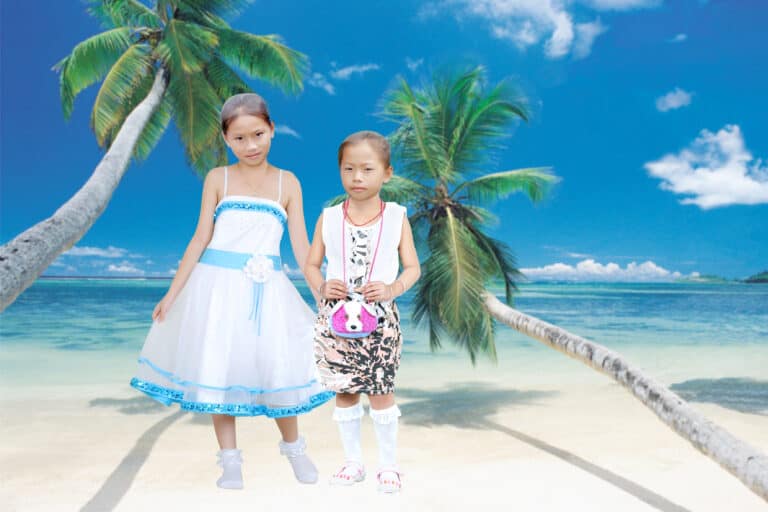